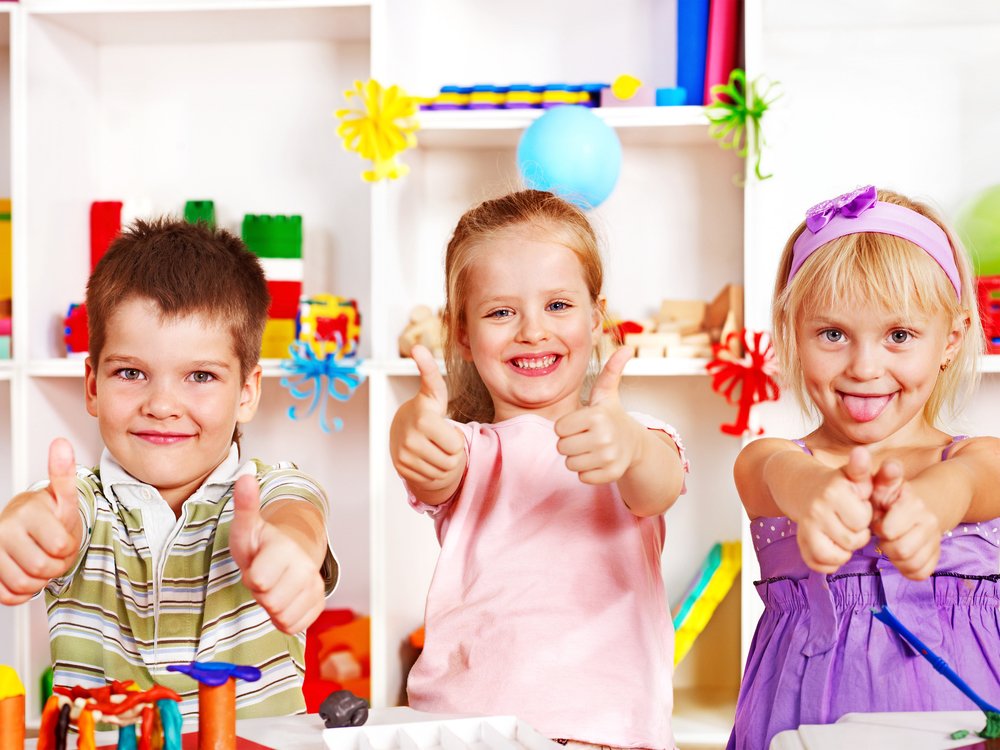 Full-day kindergarten clearly has an edge over part-day kindergarten in building literacy and math skills, according to numerous studies. The difference is estimated to be similar to one extra month of schooling. Nevertheless, by third grade, kids who attend part time kinder seem to catch up to their full-time kinder peers.

Also, research is mixed on whether full-day kindergarten is beneficial to social and emotional development.

Less anger, shyness and blaming in full day kinder according to large study

More social interactions and small group activities in full day kinder, no difference in fatigue, according to large study

Our research question was whether the teachers in the full-day classes would rate their students as displaying fewer inappropriate behaviors than teachers in the half-day program. There are eight facets of student behavior in the checklist: follows classroom /school rules, accepts responsibility for own actions, works well independently, works and plays well with others, uses time wisely, uses self-discipline, cares for property and materials, participates in class activities. These indicators were all on a 0-3 point scale in which a higher score represented better behavior. Summing the scores for all eight indicators would result in a possible highest score of 24. The gains for English-speaking (1 point vs 0) and Spanish-speaking groups (4 points vs 3) indicate that full-day students in both English-speaking and Spanish-speaking classes made greater gains than their half-day peers.

Huntington Beach City School District in southern California offered an experimental full-day instructional program for 60 kindergarten students. Instructional time in two experimental full-day classrooms was increased from 180 to 270 minutes. This study examines the processes and outcomes of the full-day programs and contrasts them with those of traditional classrooms at two other district schools. Program dimensions studied included acquisition of skills and knowledge in reading, mathematics, and social and environmental science; allocated and engaged learning time; incidence of fatigue; classroom organizational patterns; teacher expectations; and attitudes of students, parents, and teachers toward the program. Findings provided evidence that the extended-day program gives 5-year-olds a measurable advantage in acquisition of skills and knowledge; enhances self-confidence, independence, and cooperation; and illustrates to the community the district administration’s intention to strengthen the elementary school curriculum.

We found that attending a full‐day kindergarten was unrelated to reading performance. After controlling for nonacademic readiness at kindergarten, children who had attended a full‐day program at kindergarten showed poorer mathematics performance in fifth grade than did children who had attended a part‐day kindergarten program. Attendance in a full‐day kindergarten program was negatively associated with the development of nonacademic school readiness skills. Children who participated in a full‐day kindergarten program demonstrated poorer dispositions toward learning, lower self‐control, and worse interpersonal skills (the child’s skill in forming and maintaining friendships, getting along with people who are different, comforting or helping other children, expressing feelings, ideas and opinions in positive ways, and showing sensitivity to the feelings of others) than children in part‐day programs. Children in full‐day programs also showed greater tendency to engage in externalizing behaviors (measured by a scale indication acting‐out behaviors such as getting angry, arguing, fighting etc.) and internalizing behaviors (measured by a scale indicating presence of anxiety, loneliness, low self‐esteem, and sadness) than children in part‐day programs. With the exception of class size, few kindergarten program features were related to nonacademic readiness skills. Larger class size was positively associated with attitudes toward learning, self control, and interpersonal skills, but negatively related to problematic externalizing behaviors. The mechanism by which larger classes may promote the development of these skills is unknown, but perhaps the opportunity to interact with a greater number of peers is key. Instead, positive home background factors such as higher income and higher parental involvement with the school, were positively associated with all five dimensions of nonacademic school readiness skills.

Data for the study comprised a national sample of kindergarten students, their teachers and schools, from the Early Childhood Longitudinal Study, U.S. Department of Education. Measures of engagement were the teachers’ overall ratings of classroom behavior and their ratings of individual students on academic and social engagement measures. Ratings of class behavior were related significantly to class scheduling (students in full-day kindergartens rated the poorest) and to class size (students in small classes rated as better behaved than those in large classes). Ratings of student behavior were not consistently related to class scheduling or to class size. No behavior rating was significantly related to the presence of a teacher aide: this finding adds to a plethora of negative results regarding classroom aides.

More confidence and social skills in full-day kinder but also more behavior problems and negativity towards school, according to meta-analysis

No difference on social or emotional development with full-day kinder, according to review

The review indicates that the effect of both full- and extended-day kindergarten on basic academic skills is positive. Research on instructional time is suggestive but inconclusive. Although quantitative evidence shows no differences regarding effects on social, emotional, and developmental factors, a range of anecdotal accounts of the benefit of full-day exists. Staff and parent reactions to full-day kindergarten have been highly favorable, although attitudes depend on direct exposure. The research on student attendance is inconclusive regarding absentee rates, but preliminary evidence shows no difference in weekly patterns. Findings pertaining to special education referrals are conflicting, and grade retentions favor full-day.

Maturity level and confidence not affected by full-day kinder

Learning gains are equal to a month of additional schooling with full-day kinder, according to large study

A new national study provides some of the strongest evidence to date to support what many educators and parents of young children already believe, children learn more in full-day kindergarten programs than they do in half-day programs. The findings are based on federal data from a nationally representative sample of 8,000 children in public kindergarten programs. The results show that, on average, the learning gains that pupils make in full-day programs translate to about a month of additional schooling over the course of a school year.

More improvements in literacy and math with full-day kinder, according to large study

We address questions with a nationally representative sample of over 8,000 kindergartners and 500 U.S. public schools that participated in the Early Childhood Longitudinal Study—Kindergarten Cohort. More than half of kindergartners experience full‐day programs, which are most commonly available to less‐advantaged children. Using multilevel (HLM) methods, we show that children who attend schools that offer full‐day programs learn more in literacy and mathematics than their half‐day counterparts.

Only mathematics skills were significantly improved with full-day kindergarten

Literacy outcomes better in full-day kindergarten, but effects are greater in smaller classes

Literacy data obtained on students were examined to assess relationships between kindergarten program model (full- vs. half-day) and student literacy outcomes. Application of multilevel modeling techniques to the time series data collected from kindergarteners in economically disadvantaged school contexts in a large southwestern school district revealed that students exposed to a full day of instruction had greater literacy growth than their peers in half-day classrooms. Further examination of the program model results revealed that the relative efficacy of full-day kindergarten tended to be greater in smaller class size environments.

Academic effects of full-day kinder persist, to a point

This statewide longitudinal study was designed to investigate the effects of kindergarten schedule (half day, alternate day, and full day) and prior preschool attendance on elementary children’s success (achievement, incidence of grade retention, provision of special educational services, and classroom behavior). Behavioral outcome data are reported in detail. Results from the longitudinal study indicate that children who attend preschool prior to kindergarten experience greater subsequent success in elementary school than those who do not. Results from both phases of the study indicate that participation in full-day kindergarten is positively related to subsequent school performance, at least through first grade. Additional analyses demonstrate the significant impact of age at entrance to kindergarten and of gender.

In a study of the effectiveness of all-day kindergarten for the Newark, New Jersey, Board of Education, Koopmans (1991) looked at two cohorts of students: one in its third year of elementary school and the other in its second year. There were no significant differences in reading comprehension and math scores on the California Test of Basic Skills (CTBS) for the first cohort; however, both reading comprehension and math scores were higher for students in the second cohort who had attended all-day kindergarten.

This paper uses the Early Child Longitudinal Study–Kindergarten Class of 1998–1999 to evaluate the efficacy of this policy. We find that there are initial benefits for students and the mothers of students who attend full‐day kindergarten, but that these differences largely evaporate by third grade. Contrary to claims by some advocates, attending full‐day kindergarten is found to have no additional benefit for students in families with income below the poverty threshold.

Higher test scores in third grade after full-day kinder, no relation to scores in fourth in large study

The findings indicated that Anchorage students had the opportunity for success regardless of the type of kindergarten program they attended, but that not all students were successful. Factors such as individual student initiative, home life, and educational opportunities after kindergarten influenced students’ later educational career and successes more that the type of kindergarten program attended. Based on the findings, it was concluded that the full-day program has been implemented successfully, offers students an immediate pay-off in preparation for first grade, and relates to success in middle school. During Grades 4-11, students who had attended half-day kindergarten generally scored at expected grade level on the Iowa Test of Basic Skills at higher rates than their full-day kindergarten peers.

Other research regarding full-day kinder

Over the past three decades, enrollment in full-day kindergarten has grown considerably—from roughly one-tenth to just over half of US kindergartners today. Full-day kindergarten reappeared first in the 1960s as an intervention designed to help disadvantaged children “catch up” to their peers through additional schooling. More recently, it has gained popularity among non-poor parents and schools, so that children presently enrolled in full-day programs are, on average, very similar to their half-day counterparts in baseline test scores as well as other child, parent and school characteristics. Using longitudinal data, I estimate the impact of full-day kindergarten on standardized test scores in mathematics and reading, as children progress from kindergarten to first grade. I find that full-day kindergarten has sizeable impacts on academic achievement, but the estimated gains are short-lived, particularly for minority children.

Only child benefits – show me the research!
Next Post: How much exercise per week is best for longevity?