You are here: Home / Family / Chores make kids happy, according to research 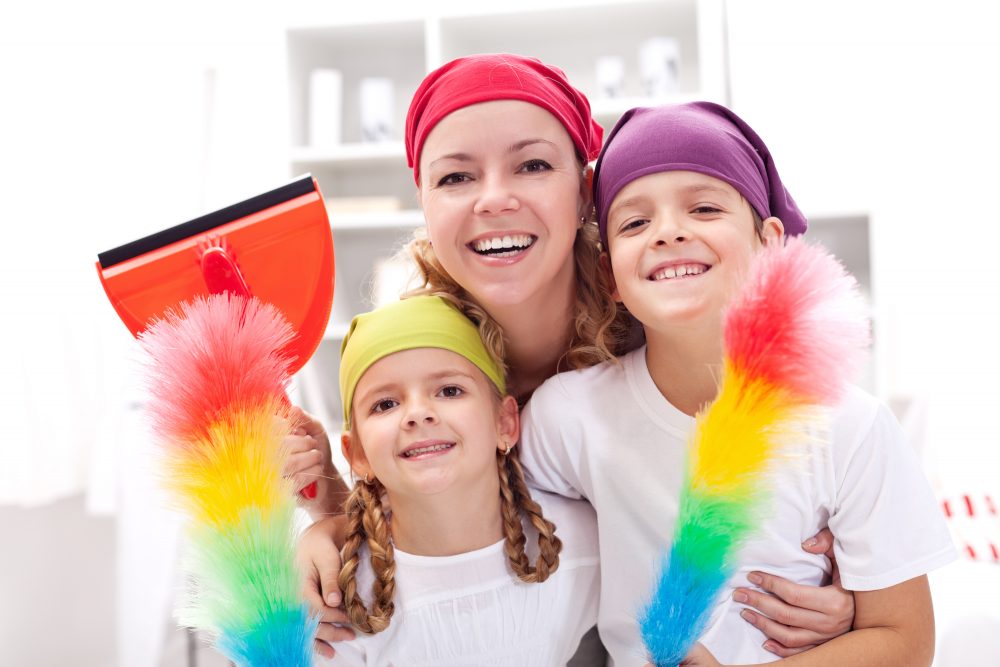 Children who do chores at home are found to have have better prosocial behavior, higher life satisfaction and more positive self-affirmation. In addition, kids who perform chores have higher math scores and are more likely to be described as calm. As adults, those who grew up doing chores have better mental health and are more successful in their career and friendships.

On the other hand, excessive chores can lead to depressive symptoms in children as well as bullying behavior.

“We analyzed data from 9971 children entering kindergarten in the United States in 2010 to 2011. During kindergarten, parents reported the frequency with which their child performed chores. In the third grade, children responded to a questionnaire regarding their perceived interest or competence in academics, peer relationships, prosocial behavior, and life satisfaction. Children also completed direct academic assessments for reading, math, and science. Results: The frequency of chores in kindergarten was positively associated with a child’s perception of social, academic, and life satisfaction competencies in the third grade, independent of sex, family income, and parent education. Compared with children who regularly performed chores, children who rarely performed chores had greater odds of scoring in the bottom quintile on self-reported prosocial, academic ability, peer relationship, and life satisfaction scores (odds ratio = 1.17, 1.25, 1.24, and 1.27, respectively). Performing chores with any frequency in kindergarten was associated with improved math scores in the third grade. Conclusion: In this longitudinal cohort study, performing chores in early elementary school was associated with later development of self-competence, prosocial behavior, and self-efficacy.”

Children with chores are more likely to feel good upon waking, be calm and have good self-affirmation (n=1719)

“The current study aims to examine association between children‘s depressive symptoms and the domestic choresworkload (i.e., the frequency and the amount of time doing domestic chores). A total of 1449 children in family-based care were included in the analysis: 579 orphaned children who lost one or both parents due to AIDS, 466 vulnerable children living with one or both parents being infected with HIV, and 404 comparison children who did not have HIV/AIDS-infected family members in their families. Children affected by HIV/AIDS worked more frequently and worked longer time on domestic chores than the comparison children. Multivariate linear regression analysis showed that domestic chores workload was positively associated with depressive symptoms.”

“Rossmann explored outcomes for 84 young adults based on an in-depth study of their parents’ style of interacting with them, their participation in family work at three periods of their lives (ages three to four, nine to 10, and 15–16), and a brief phone interview when they were in their mid-20s. Variables such as parenting styles, gender, types of household tasks, time spent on tasks, and attitudes and motivators connected to doing the tasks were analyzed for their relationship to outcomes for the children. Using measures of individual’s success such as completion of education, getting started on a career path, IQ, relationships with family and friends, and not using drugs, and examining a child’s involvement in household tasks at all three earlier time, Rossmann determined that the best predictor of young adults’ success in their mid-20s was that they participated in household tasks when they were three or four. However, if they did not begin participating until they were 15 or 16, the participation backfired and those subjects were less “successful.” The assumption is that responsibility learned via household tasks is best when learned young. How the tasks are presented also influences children’s abilities to become well-adjusted adults. The tasks should not be too overwhelming, parents should present the tasks in a way that fits the child’s preferred learning style, and children should be involved in determining the tasks they will complete, through family meeting and methods such a weekly chore chart. They should not be made to do the tasks for an allowance. The earlier parents begin getting children to take an active role in the household, the easier it will be to get them involved as teens.”

Among those who grew up in poverty, industriousness in childhood predicted mental health better than family cohesion or warm maternal relationships

“Launched in 1939, the study had a control group of nondelinquent boys who grew up in similar circumstances—children of poor, mostly foreign-born parents, about half of whom lived in a home without a tub or a shower. The Glueck study data suggested that industriousness in childhood—as indicated by such things as whether the boys had part-time jobs, took on chores, or joined school clubs or sports teams—predicted adult mental health better than any other factor, including family cohesion and warm maternal relationships.”

“Rende (2015) notes that chores have been shown to decrease risk of drug and alcohol abuse, reduce behavioral problems, increasing school engagement, increase positive mental health in adulthood and increase family cohesion due to the shared responsibility. Research by Kennedy-Moore (2013), has also shown that childhood chores lead to increased competence with necessary life skills, increase in instilling values and even general well-being.”

“This study examined effects of type of and cumulative burden of childhood adversities on bullying and cruelty to animals in the United States. Data were derived from Waves I and II of the National Epidemiologic Survey on Alcohol and Related Conditions, a nationally representative sample of U.S. adults. For bullying, these included being made to do choresthat were too difficult or dangerous, threatening to hit or throw something, pushing, shoving, slapping, or hitting, and hitting that left bruises, marks, or injuries. With respect to cruelty to animals, swearing and saying hurtful things, having a parent or other adult living within the home that went to jail or prison, and adult/other person fondling/touching in a sexual way were significant. The final models indicated that the cumulative burden of childhoodadversities had strong effects on the increased likelihood of bullying behavior but not cruelty to animals.”

Chores are one of three most frequently reported sources of stress in sixth-graders; total stress associated with increased risk of smoking

“We compiled a checklist of stressful life events relevant to multiethnic youth and administered it to 1,074 sixth-grade students in urban Los Angeles. RESULTS: The most frequently reported stressful events were similar across ethnic groups and generations in the USA: test taking, chores, and arguments with friends. The events reported as the most severe were disturbances in family life, such as: death, arguments between parents, and illness or injury. Total stress was associated with ever smokers, smoking intentions within the next year and in high school over the entire sample.”

In 1992, the average child spent 7 hours per week on housework

“Using data from the National Survey of Families and Households, this study tests two competing theories of children’s labor participation. The first, dealing with child socialization,proposes that parents assign household chores to children as a socializing experience (e.g., to promote responsibility). The second posits that children are used as a labor source whenever structural constraints prevent adults from performing the necessary chores, and alter the demand for household labor. The results indicate that children average 7 hours of housework per week, representing 12% of all household labor. Both theories receive support, yet the pragmatic aspects of households (e.g., adult labor force participation) receive greater confirmation.”

List of most common chores performed by kids aged 6 to 14:

How much exercise per week is best for longevity?
Next Post: What thin people eat, according to research